Based in Howard Lake, Minnesota, Innocast Execuline is a creator of beautiful custom company awards. Clients across the nation such as the White House, NASCAR, Fortune 500 companies, and more request Innocast Execuline to create tasteful and artistic custom awards.

Innocast Execuline began in 1983 with Stan and Phil Efron, a father and son team. They purchased the local bronze bell factory in Howard Lake, Minnesota, and immediately started to diversify the business into memorials and awards. Stan was an accomplished sculptor in his own right.

Stan and Phil brought Innocast Execuline to the forefront of the custom awards industry for the next three decades. Stan passed away in 2009, and Phil carried on the work. 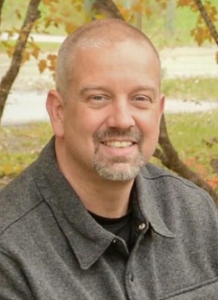 Brent Hartwig, along with his wife, Darci, became part of the Innocast Execuline family in 2015. As of 2019, the Hartwig’s are the sole owners.

The manufacturing floor and artists work in sync to create an impressive breadth and width of company awards for a huge variety of industries. But the team also flexes their creative and artistic muscles to craft custom awards and sculptures.

“Watching someone have tears in their eyes from a piece we made . . . that’s priceless to me,” Brent says. “We can work on a big, cool, conference piece, but often it’s the personal pieces that are so meaningful.”

Recently, the team has the opportunity to create a life-size bronze sculpture of the original owner of a local automotive scrapyard. From clay to mold to bronze, hundreds of hours were spent perfectly crafting the sculpture to honor the grandfather of the family. 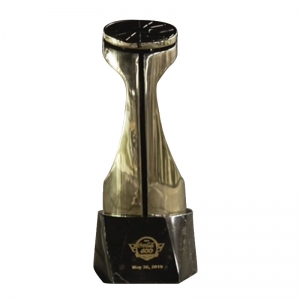 Awarded to the winner of the Coca-Cola 600 at Charlotte Motor Speedway, the Bruton Smith Trophy is one of the most iconic trophies in NASCAR.

The Doughboy statues are life-size bronze-cast statues of World War I American soldiers, affectionately referred to as “doughboys”.

In Prior Lake, Minnesota, Innocast Execuline was honored to build a statue named “The Missing Man”.